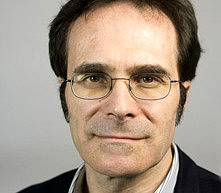 Pablo Pardo is a correspondent for El Mundo newspaper in the United States, where he has lived since 2002. He has written for magazines such as The Atlantic, Foreign Policy, National Geographic and The Weekly Standard, and he has cooperated with many think tanks, including the New America Foundation and Atlantic Council in Washington, D.C. and the Centre for European Reform in London. He is an Aspen Fellow who has attended seminars at the Universities of Columbia, Harvard (Weatherhead Center) and Oxford (Christ Church College). Furthermore, he has won numerous awards, including Sir Antony Fisher Awards from the Atlas Foundation (2009); Joven y Brillante de Periodismo Económico (2005); Citi Journalistic Excellence Award (2001); and Centenario de la Seguridad Social Award (2001). He holds a master’s in International Economics and Politics from the School of Advanced International Studies (SAIS) at Johns Hopkins University.