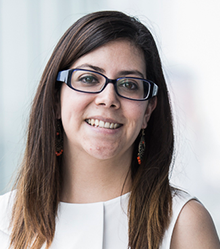 Maria has more than five years of experience in public affairs, strategic communications and electoral campaigns. Before joining LLYC, she supported the generation of political intelligence products for the 2012 presidential campaign of the then candidate of the New Alliance Party. She has also collaborated on writing opinion articles for various national media such as La Jornada, the news portal Eje Central and 24 Horas. In 2014, she joined the public affairs team of LLYC, where she was responsible for supporting the design and implementation of relationship and advocacy strategies in the public agenda. One of the key projects she took part in the consultancy field was the drafting of the Government Relations Manual of Tec de Monterrey. Additionally, Maria has worked on accounts that operate in highly regulated sectors such as food, pharmaceuticals and energy.