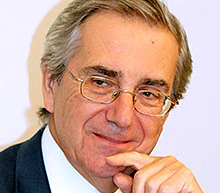 Renowned professional connoisseur of Europe and of Spanish companies’s relations with the European administration, began his career in the Spanish Confederation of Employers’ Organizations (CEOE) as deputy director of the Department of European Communities. For 25 years  he was the director of the CEOE Delegation in Brussels, a position from which he represented the interests of Spanish companies before European Institutions and BUSINESSEUROPE. Subsequently, and for two years, he was deputy secretary-general of the CEOE. For 24 years, he was Adviser to the European Economic and Social Committee and Vice-Chairman of the Employers Group. He is a Trustee of the ADECCO Foundation and President of VALCAMBRE. He holds a degree in economics and business studies from the University of Seville, a master’s degree in European studies from the Catholic University of Leuven and a diploma in European studies from the Ministry of Foreign Affairs of Spain (Diplomatic School)and holds a Diploma in National Defence from CESEDEN.