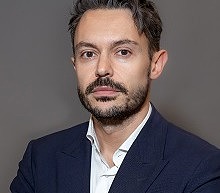 David earned a bachelor’s degree in journalism from the Complutense University of Madrid and Global CCO from ESADE. He has worked for media such as El Mundo and Cadena Ser, and in the press department of the cultural organization Círculo de Bellas Artes in Madrid. Before heading the Consumer Engagement area in LLYC, he directed national communication campaigns for brands such as Heineken, Red Bull, Movistar and Ron Barceló for seven years as Senior Coordinator at the Actúa Comunicación agency. As global manager of the area, he coordinates eight markets in LLYC and has directed emblematic projects for Campofrío, Coca- Cola, Telefónica, Gonvarri, Bezoya and Sacyr. He has received more than 50 awards for his projects, including a Cannes Lions award and numerous Gold Stevie Awards. Natal is a storytelling lecturer for many national master’s programs.