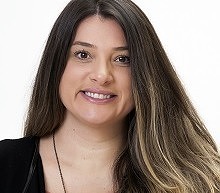 Bete Lima has extensive experience planning and implementing communication initiatives for brand, products and services. For 10 years, she served as an account executive in sectors such as consumer goods, lifestyle and sports, working for companies around the globe. She has collaborated on consumer-focused projects for Samsung, Adidas and Johnson & Johnson, as well as the sponsorship division of the 2014 Brazil FIFA World Cup.

Lima joined the LLYC team in 2014. Since then, she has managed consumer relationships for companies such as Volvo, Bacardi, Coca-Cola, FEMSA, the Inter-American Development Bank (IDB) and Hilton Hotels, among others. In addition, she contributed to sponsorship and promotion projects in association with the 2016 Rio Olympic Games. Currently, she works as an account manager for our Rio de Janeiro team.

Lima studied Journalism and Social Communications with a specialization in Sports Communication at Faculdade Cásper Líbero.