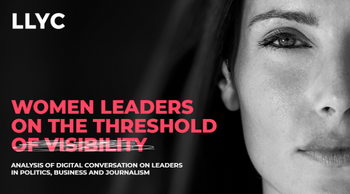 Women leaders on the threshold of visibility

At LLYC, we are convinced that the visibility of female talent accelerates equality in the work force because it normalizes the presence of women in all sectors and disciplines, provides references for new generations, promotes models of diverse success and leadership, and boosts women’s professional careers. In 2019, we published a report titled “Contar y contarlo” [Say and tell it,] in which we compiled and compared studies on this trend.

Deciding to cross this threshold and become more visible is not as simple a task as it appears. The “self-promotion” gap, that is, the difference in the efforts made by women and men in highlighting their achievements, advertising themselves in the marketplace, and generating visibility regarding their professional profile is as much as 33%, according to studies published in the Harvard Business Review. This research points to some potential reasons for this, such as a lower level of confidence by women in their own professional capabilities and greater conviction by men of the relationship between these self-promotion strategies and financial incentives.

One of the factors that could have the most influence is the “double-bind bias.” This refers to the fact that these visibility and marketing actions create the opposite effect for women. They are, or fear being, penalized for promoting themselves, even when their minimized presence also has negative consequences for their careers. In contrast, men are applauded and not penalized for the same conduct and attributes.

Another barrier may be the greater dedication of women to their families and to care work. According to the ILO, women devote 4.4 hours per day to unpaid caring, while men devote only 1.4 hours per day. As promotion and visibility activities are considered to be additional – and not inherent – to work duties, they are often performed out of working hours, which thus adds another layer of difficulty to the already complicated work-life balance.

Lastly, reports by international bodies like Amnesty International warn of the violence that exists against women on social media, a clear disincentive for greater participation.

None of these elements would seem, judging by what has been published to date, to be the only cause or one that wholly justifies the lower visibility of women individually. We wondered whether, analyzing digital conversation, we could contribute to understanding this combination of reasons and, with a clearer diagnosis, what strategies could be most effective in general or specifically in the countries in which we operate.