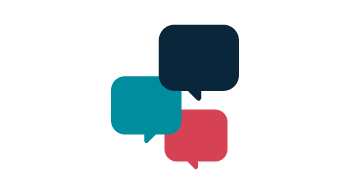 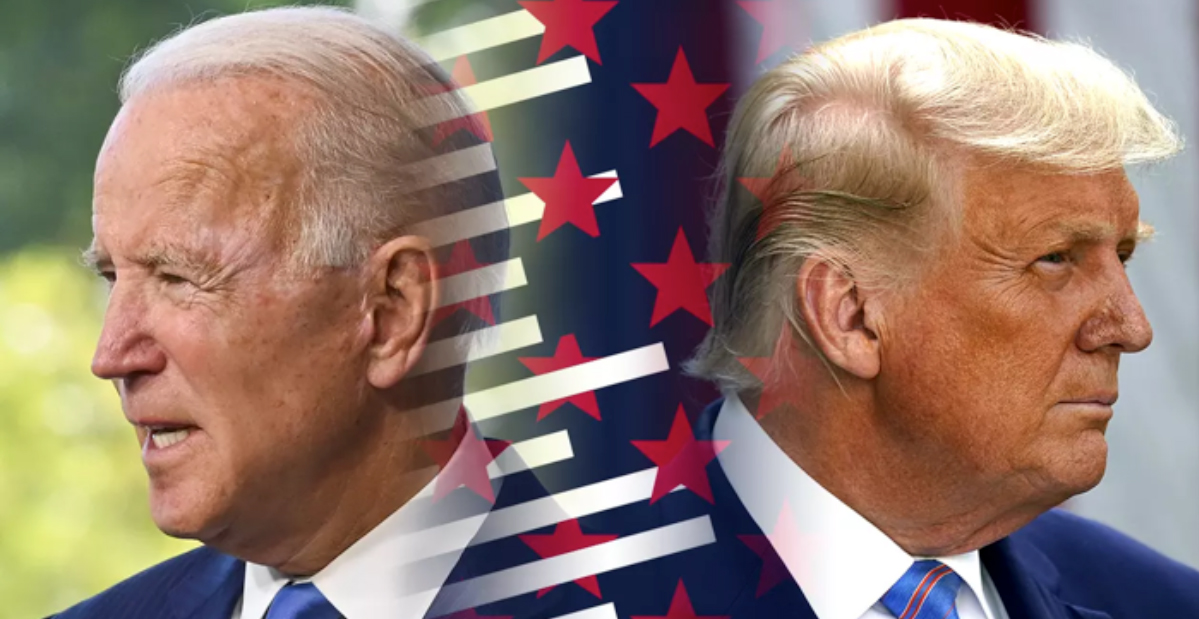 As always, when the U.S. presidential elections occur, media and social attention around the world focuses on North America. On Tuesday Nov. 3, 2020, the 59th presidential election will decide who will lead the White House for the next four years. The current president, Republican candidate Donald Trump, is running against Democratic candidate Joe Biden, vice president during the Obama administration from 2009 to 2017. This report analyzes each candidate’s key messages.

These messages expose the intentions hidden in their electoral strategies, the type of vote that appeals to each candidate, and what journey they want to endure in the home stretches of their campaigns to gain presidency. After analysing them, we extracted the following messages which are key to the synopsis of a better understanding of the analysis.

The Trump-Pence ticket is using the same slogan that brought the current president to the White House four years ago. Accordingly, the already famous claim to “make the country great again” remains the campaign’s flagship, reflecting a way of doing politics while simultaneously understanding the United States. It serves as an intermediary between the conservative population and those opposed to the Washington establishment. Curiously, this slogan (“Let’s make America great again”) is not new; it was used in Ronald Reagan’s victorious candidature in 1980.

It is clear that this message perfectly sums up Donald Trump’s political message, which is already closely linked to his public figure. Because of this, an abbreviated form of this message is already commonly used: MAGA. It should be highlighted that, on certain occasions, the campaign team has also used another permutation of the slogan: “Keep America Great!” With this combination, they seek to build a sense of loyalty among the same electorate that supported Trump in 2016. This is a purely strategic communications decision, as the analysts believe his chances for reelection rely on his original supporters rather than on drawing in new voters.

“The slogan ‘Let’s make America great again’ is not new; it was used in the past in the Ronald Reagan’s victorious candidature of Ronald Reagan in 1980”

TRUMP’S KEY MESSAGES FROM THE CANDIDATE

Unlike in the previous campaign, Trump’s team is trying to use his work in government to gain an electoral edge. The recurring message of “Promises Made, Promises Kept” expresses this intention, reminding people of everything he has done, focusing above all on economic affairs before the pandemic, and inviting voters to support Trump so he can filfill his promises in the coming years, These promises center on the economy (#MAGAnomics), citizen security (“protecting America”) and international politics  (“making America first”).

The attributes of the president’s personal brand are:

CONFRONTATION WITH THE OPPOSITION

Finally, it should be highlighted that Trump’s political communications habitually resort to concepts and expressions that allow him to attack his opponents, whether they be the media or Biden himself. Here, we see the candidate regularly using expressions such as “Fake news!” and personal insults like “Biden is the system” or calling Biden “Sleepy Joe.”

Campaign slogan: “Battle for the soul of the nation”
joebiden.com

Joe Biden’s chosen slogan seeks to connect with the electorate by evoking the soul of the United States. This is a standard tool in political communications, particularly in times of great social complexity. Here, the main message focuses on creating positive connotations at an emotional level. This implication enhances the importance of this electoral event, with the Democrats seeking to convey that not only is the country’s presidency at stake, but the entire model of North American society as well. They contrast Trump’s America with Biden’s Democratic vision. Barack Obama’s former vice president’s legacy has been systematically criticized by the current president.

The final piece of this slogan comes following the use of the concept “soul of America” by both Biden and Democratic vice presidential candidate Senator Kamala Harris.

As a candidate in the U.S. presidential election, Biden has found his political rhetoric forced to compete with Trump. In this regard, he has expressed that his intention is not only to rebuild everything positive the United States stands for, but also create the best country possible (“Build back better than ever”) because “America is an idea.” By doing this, he is working to entice voters with a desire for change.

LEADERSHIP AS A TEAM

The Democratic candidate’s political communications are less personal than his Republican rival’s. Of course, they seek to highlight Biden’s best attributes, but they present it more as a movement rooted in American society. Mentions of Martin Luther King and the Kennedys can be found in Biden’s web campaign, as well as pictures with Barack Obama to highlight the candidate’s vice presidential experience and demonstrate his successful team leadership. It also shared Biden’s personal story as one of overcoming hardship, both on the personal level (he saw his first wife and two of his four daughters die) and politically (against all odds, he was elected as a senator when was only 30 years old).

Biden’s campaign has based its messages around opposing the Trump administration’s management. It shares how Biden believes things should have been done, focusing on explanations of the consequences of the COVID-19 pandemic and the country’s economic recovery (“That starts with a real strategy to deal with the pandemic”). Biden’s explanatory content is particularly aimed at voters concerned with working families, racial equality and public health and social services.

In an attempt to underscore Biden’s belief that the current president manages poorly, he presents a complete plan covering a wide range of social sectors. He does this while using frequent assertive messaging and projecting the consequences of Trump’s policies: “Make no mistake: America has been knocked down.”

As explained above, Trump in particular has resorted to a critical, negative campaign, with regular mentions of Biden’s and the Democrats’ potential weaknesses. In contrast, Biden is employing a more positive campaign. The contrast between these two strategies could be clearly seen in the first live debate between the two candidates, held at the end of September, as well as in the content of their web campaigns. But there is one subject that has seen a role reversal: The COVID-19 pandemic. It is interesting to see the messages, degree of belligerence and importance the candidates have placed upon it… with the roles reversed.

Of course, the fact that Trump has had to face COVID-19 mid-campaign has further put the media and social spotlight on the pandemic and its consequences. Audiovisual content in both web campaigns demonstrates the main elements Trump and Biden try to capitalize on (in terms of votes) regarding their positions on the global virus. 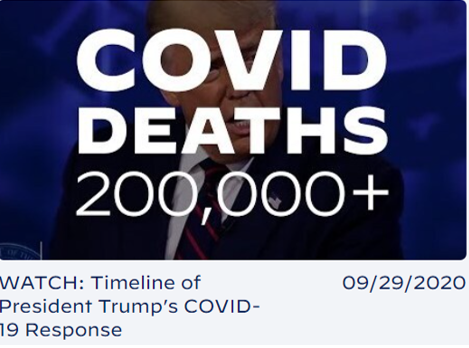 Biden has once again opted to use a counter-position. He boosted this negative campaign through a video called “Timeline of President Trump’s COVID-19 response,” unambiguously underscoring the incumbent’s contradictions and changes of course during the pandemic. A resounding “COVID deaths: 200,000+” closes this audiovisual clip, which can be found on the Democratic candidate’s website alongside his main content. This section of his site includes a clear offer: “Joe and Kamala’s Plan to Beat COVID-19.”

On the other hand, Trump’s campaign, in light of the virus’ spread and his own experience as someone infected, show the very essence of how he understands leadership and political communication. After repeatedly referring to COVID-19 as the “Chinese virus,” he prioritized other elements of his campaign, aware that this was an area more favorable to his opponent. But when news of his infection broke, his communications strategy changed radically, focusing his daily campaign on his personal fight against the virus and his political image, whereby he has triumphed in all aspects of his life.

Of course, the content of his web campaign and his official social media accounts have given a large amount of coverage to his numerous messages about his fight against the virus and his speedy recovery. This has also been supported through audiovisual content, with Trump sending out several very personal messages to the country explaining how he tackled and beat COVID-19. His campaign team even organized a live “Call to Prayer” to pray for all those affected by the pandemic, but it included constant allusions to the Republican candidate. These efforts focused on elevating him as a symbol of how to understand not only the United States, but also a current global reality.

Connecting with his vision of the pandemic, the famous business leader has called for his fellow countrymen to tackle the virus with individual determination: “Don’t let the coronavirus dominate your life!” In another video outside the Oval Office following his full recovery, Trump calls himself “your favorite president” before expressing his gratitude to the healthcare professionals around the country and firmly sharing his willingness to continue his reelection campaign.

All of the above was done with a total focus on his personality and on strengthening his image as a leader. This undisguised strategy is perfectly reflected in one of his short campaign videos, titled “President Trump returns to the White House!” This piece shows his return home after receiving medical treatment. The clip went viral. This video has no text or voiceover; it is just 35 seconds in which you see Trump return to the White House in his helicopter after beating the coronavirus, thus projecting his favorite image – that of a strong leader who can handle anything. He demonstrates pure #compol, communicating pure trumpismo. Only time will tell whether this helped him defeat Biden, who strives to portray himself as Trump’s perfect antithesis.

“The Democrats wish seeking to convey that not just only is the country’s the Ppresidency of the country is at stake, but also the entire model of North American society” 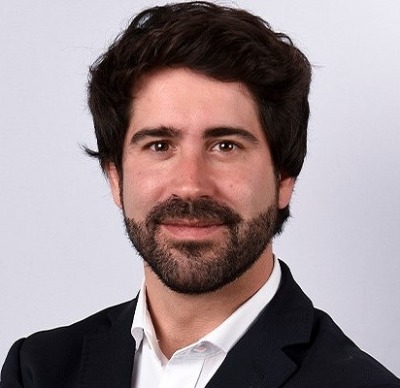 Roger Montañola
Senior Public Affairs Advisor
He is a specialist in technology and political intelligence. From the Public affairs area in Barcelona, where advisors and consultants of businesses specialize mainly in technology and mobility. In 2016, he founded the Consultancy Diplolicy, and a year later he motivated the space for the Twenty50 debate. Furthermore, he was a partner and cofounder of Diplodat Technologies, an agency of political risk analysis. He had been a young member of the Catalonian Parliament, at the hand of Convergència i Unió. Also, he collaborated with a political analyst in TV, the National Radio of Spain, and currently, in 8TV, Rac1 and TV3. Roger is a graduate in political sciences from the University of Pompeu Fabra, and he has a postgraduate degree in the same course, from the University Autónoma, in Barcelona. He is an alumni IVLP from the State Department and 40 under 40 European Young Leaders in 2019, according to TT Friends of Europe.
[email protected] 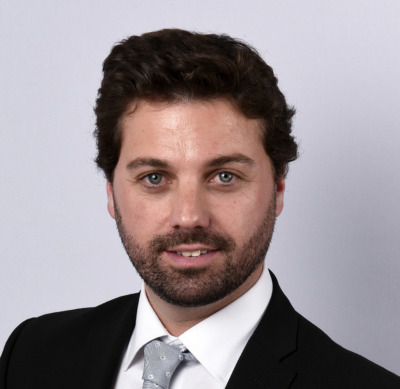 Xavier Salvatella
Senior Public Affairs Advisor
He is a professional in communication, the management of companies and public relations. He holds a law degree from the University Autónoma, Barcelona and in journalism from the University of Pompeu Fabra. He completed a masters in Institutional Communication and Politics at the University Carlos III in Madrid. From 2009 until 2010 he worked as a Communications Consultant in AC as an account executive, and from 2010-2011 he worked as a Corporate and Political Communications Consultant in the group GAD3. From 2011 and until the end he was the Director of Communication for RCD, in Spain and Barcelona. Furthermore, he collaborated with a professor from diverse Universities at a national level such as Pompeu Fabra and the Ramon Llull over corporate and institutional communication Salvatella is also the Founder of Twenty50 and a member of the Global Board of this association.
[email protected]
Do you want to know more about it?
Articles
Areas
Professionals