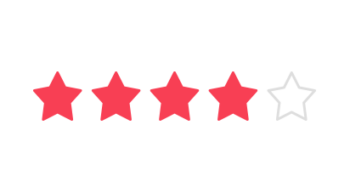 Bailouts, preferred stock, mortgage expenses, millionaire retirements, commissions… In recent years, days when the economics section of a newspaper contains none of these words have become few and far between. This situation has only been exacerbated by the public’s lack of differentiation between the guilty and guiltless, as well as the absence of a voice highlighting banks’ value despite their missteps. The media noise, deserved or not, is now reflected in reality, resulting in a bad reputation for an entire sector.

To determine whether banking’s bad press is being acknowledged and absorbed by the public, one can look to the latest Reputation Relevance study, published by LLYC. It regularly analyzes a representative sample of the Spanish population and its opinion on the country’s 15 main activity sectors, providing a global snapshot each of their public reputations. 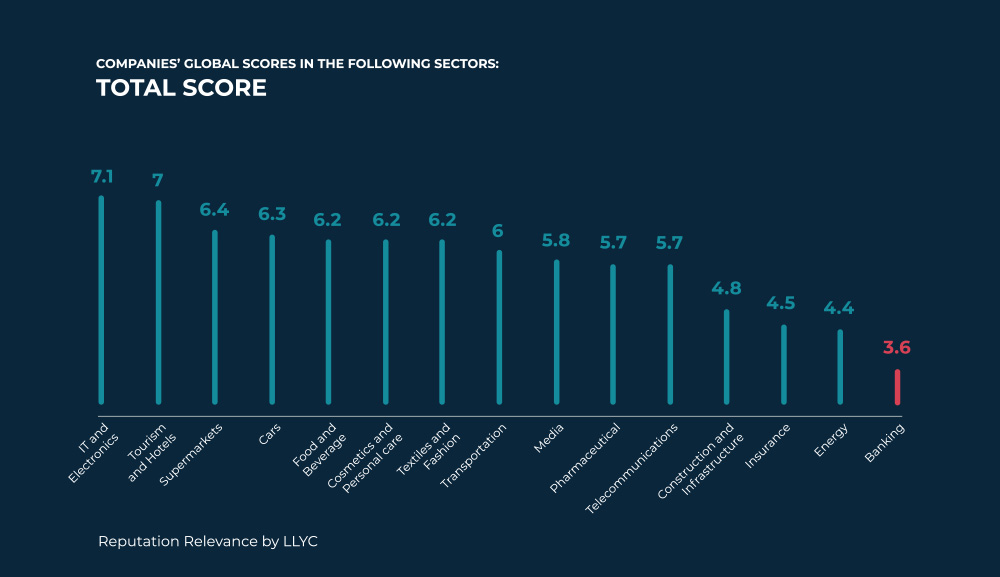 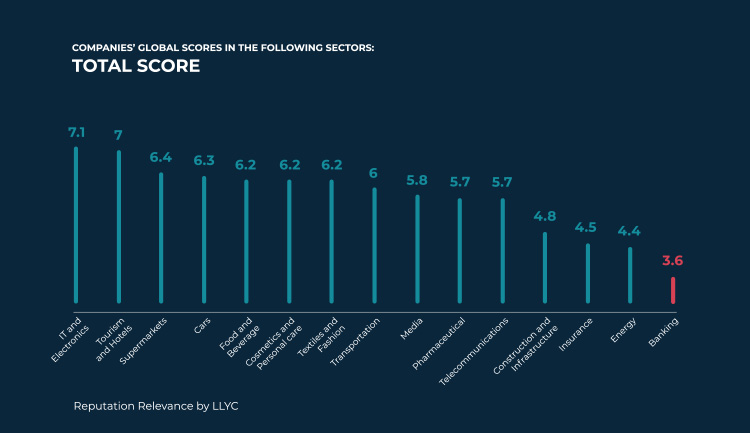 Banking is clearly the sector with the lowest score, and the only sector whose score is below 4 (3.6). Using the scoring table as a metric, the sector as a whole has a “poor” reputation, sitting only one step above the lowest possible score (“bad,” between 1 and 2). 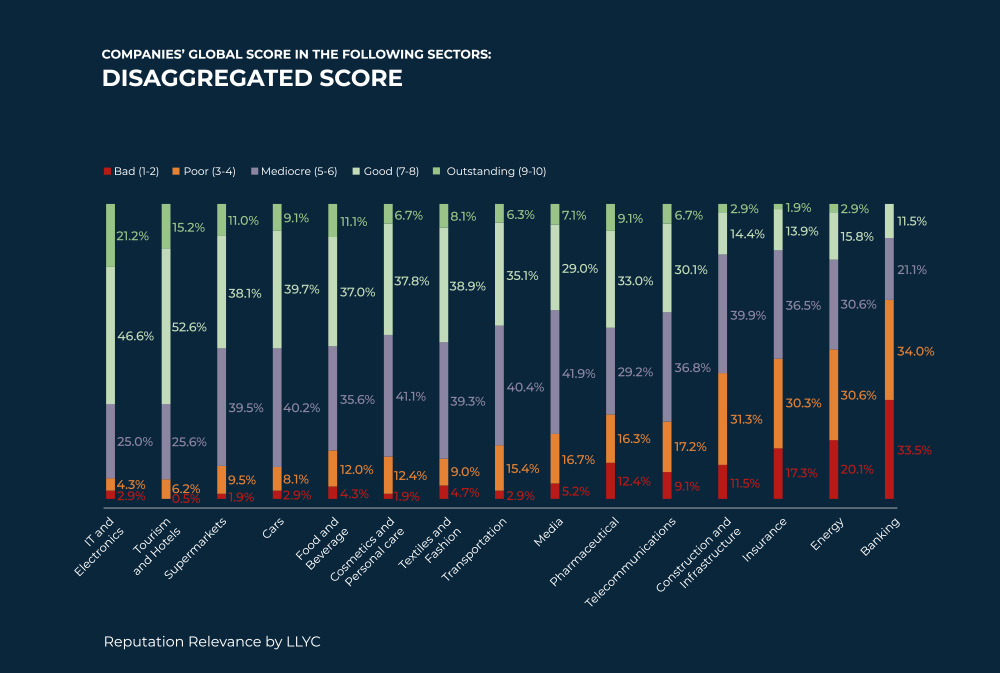 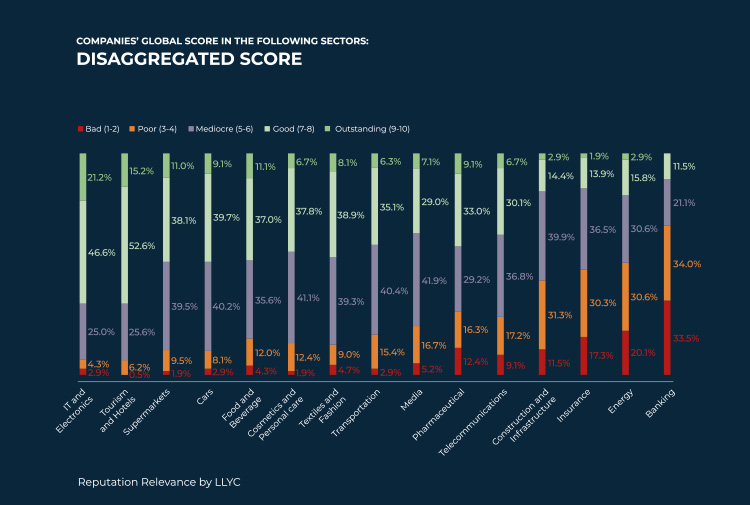 How did the current situation come about?

Banks began to protect themselves by instituting presidential structures with relatively little regard for the interests of shareholders during this period. Since then, banks have tended to appear as insular communities, distanced from public realities.

As regional and national politicians assumed control of certain savings banks, the sector began to grow exponentially. Some politicians climbed by questionable means. When problems began to arise as a result, their miscalculations or dubious transactions became public knowledge. These stains extended to the whole sector, causing the banking sector’s first systemic reputational crisis. Furthermore, many banks attempted to downplay that crisis rather than own up to it.

Until relatively recently, most generations of Spanish citizens had a near-blind faith in bank directors. But this relationship came from a time of traditionally uncomplicated business activity, usually limited to offering standard products and mortgage advising. This trust was shattered by the issue of preferred stock. While most invested customer money was eventually returned, a considerable portion had to be recovered by heirs. Many elderly customers died without ever seeing their money, and bank reactions to this situation were not proportionate to its severity.

Silence Instead of Communication

By some interpretations, the main mistake banks made was failing to spread positive messages just after the Bankia bailout. Instead, most entities preferred to remain silent, and were thus unable to react to the regulatory changes to the minimum interest rate clause (cláusulas suelo) or fluctuations in the tax on documented legal acts.

Many believe the recent legal confusion involving banks could have been mitigated had there been some legislative anticipation.

Most agree that in recent years, every political party has joined the crusade against banks. Attacking banks has become a common way to gain support, one often used to divert media focus from political responsibilities.

Possibilities for the Future

The journalists interviewed helped outline some possible courses of action to improve the banking sector’s reputation, putting forth eight points emphasizing the importance of the financial system and its key role in society:

Social Empathy as a Priority
In order to overcome disillusionment, banks should make empathy the backbone of their communication strategies. People neither trust nor like the popular image of the haughty, aggressive banker; now, they demand a warmer, friendlier demeanor. Financial entities should promote simple, modern and direct methods to present themselves as relatable to society. Bank president and CEO rhetoric has been moving in this direction for several years, but some still believe that simple, sincere and human gestures are still missing, including apologizing and accepting responsibility where necessary.

Steps Towards Transparency
You can never have enough transparency. This is the journalists’ number one demand. Banks should make an effort to proactively share new information with their customers to create a more equitable relationship. Simply complying with stock exchange and regulatory requirements is now insufficient.

Agility: Credibility Instead of Silence
Financial entities must stop hiding and going against the current. In many instances, lack of agility has caused the sector to miss opportunities to highlight its value and reclaim its positive social role. Until very recently, banks have opted to focus on service quality, overlooking chances to support universities or integrate into society at large. Almost all the journalists recommend investigating these ideas in more depth.

Financial Education
The flipside of multiple generations of unconditional trust in banks is a weak financial education in the general public, which has historically characterized the country. The vast majority of journalists interviewed agree that financial education should be incorporated into schools. They recommend teaching finance as a standard subject, something they believe would be extremely helpful in establishing an equitable relationship between banks and their customers. Moreover, financial entities should visibly be this initiative’s main backers.

The Power of Simple Language
Many journalists interviewed believe that the excessive complexity of contracts has contributed to rulings against banks, especially in cases regarding minimum interest rate clauses. The court of Luxembourg called into question whether customers were able to clearly understand the documents they had signed. The solution is simple: use clear and easily understandable language, either in contracts themselves or in an indexed document.

Comprehensive Analysis
Increased litigation, as well as the almost ubiquitous suspicion surrounding the banking sector, has prevented banks from asserting their rights, emphasizing their social value or prioritizing the security and legal predictability they require. Journalists interviewed suggest a more coordinated and informative approach regarding bank perspectives.

Unions and Corporatism
According to the journalists, many problems arose as a result of disunity among financial entities. The sector never pushes agendas as a unified front, something which could help banks improve their collective image.

Leadership in Problem Solving
Another common thread in interviews was the idea of a perspective shift. Banks must acknowledge that what is most important is not seeking absolution from any wrongdoing, but convincing the public that banks are, have been and will continue to be a fundamental part of the country’s growth and development. 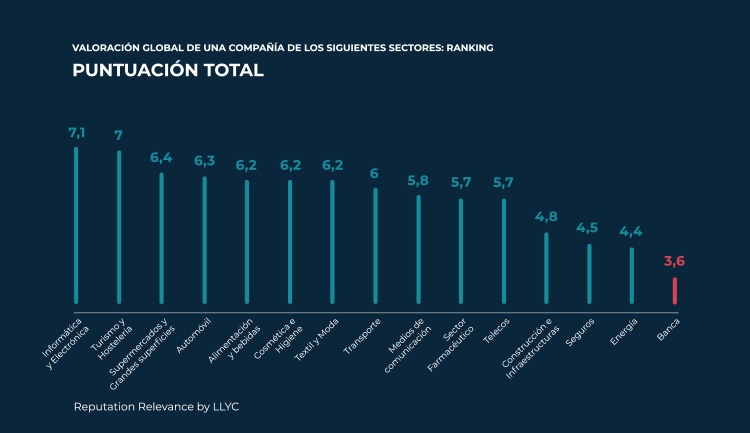 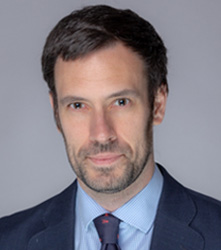 Luis Guerricagoitia
Senior Director of Financial Communications
Prior to joining LLYC, Luis worked as Head of External Communications for ING in Spain and Portugal. Previously, he was a member of the Communications Department of the National Securities Market Commission (CNMV) and worked as a journalist for the Cinco Días newspaper. During his career, he has advised different financial institutions such as Unicaja Banco, Caixabank, Abanca or Barclays. He holds a degree in Business Administration and Management from the University of Deusto and a Master's Degree in Journalism from the Escuela El País - UAM.
[email protected] 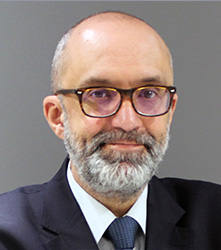 Juan Carlos Burgos
Financial Communications Manager at LLYC
After more than 20 years at Hermes Consultores de Comunicación, Juan joined LLYC in May 2014. Having graduated with a degree in Journalism from the Complutense University, he spent the following four years as part of the national training program for research personnel at the Complutense and National Autonomous Universities of Mexico. He specializes banking, insurance, energy, media, construction and real estate.
[email protected] 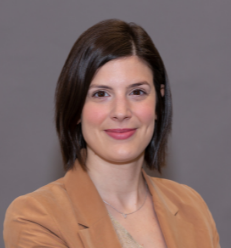 Valvanera Lecha
Corporate Financial Manager at LLYC
Valvanera joined LLYC in October 2012, where she has specialized in financial communications, advising clients in the banking sector and carrying out communications and market operations for corporate clients. She holds a degree in Journalism from the University of Navarra and a master's in Political and Corporate Communications from the same center, in collaboration with George Washington University.
[email protected]
Download here
Article
Do you want to know more about it?
Articles
Areas
Professionals