Ecuador faces the challenge of its democratic opening

Today, Ecuador is undergoing an ongoing process to open its democracy. Following the financial crisis at the end of the 20th century, the Ecuadorian economy became dollarized in 2000. Regarding politics, change came after a crisis of representation and in political parties, first germinating when Rafael Correa was elected president in 2007, then beginning to blossom when current President Lenin Moreno began the process of opening up the country on several fronts.

Ecuador searches for its footing in democracy

In the first half of the 20th century, Ecuador had close to 25 presidents—probably the most volatile period it has experienced. Later, just as in most of Latin America, it had a military government in the 70s’. After its return to democracy (1979), several governments were able to reach the ends of their terms, though not without disturbance or threats of collapse. Then, due to the social turmoil between 1997 and 2007, Ecuador had eight presidents, a stark contrast to its one president from 2007 to 2017.

Death of the sucre, birth of the dollar and economic stability

Improper management of its national currency led Ecuador to abandon the sucre at the beginning of the 21st century; trust in the sucre was lost.

In January 2000, the Ecuadorian economy became dollarized and economic uncertainty began to subside, though it did not vanish completely. In the first five years of the 21st century, the Ecuadorian economy grew at a significant rate, poverty decreased and several regulations related to fiscal prudence were enacted. The country regained its economic equilibrium, but its political situation remained highly volatile.

The political instability that permeated Ecuador from 1997 to 2006 gave rise to a new leader, one from outside the traditional system. Outsider Rafael Correan wound up winning the elections on his promise to convene a Constituent Assembly and “re-found” the nation.

Correa, a nonconformist, took a socialist management style with the economy, treating the State as the protagonist and the private sector as a series of supporting actors. This is how, in 10 years under his government, the public economy went from representing 22% of GDP in 2007 to 44% in 2017.

On the political side, Correa set up a control system. New electoral rules made it virtually impossible for the opposition to occupy democratic space. The new “power of Citizenship Participation” coopted their participation and guided the process toward appointing authorities who supported the current government. Court rulings were guided, and freedom of speech was affected by both sanctions to mass media and new regulations that resulted in self-censorship. 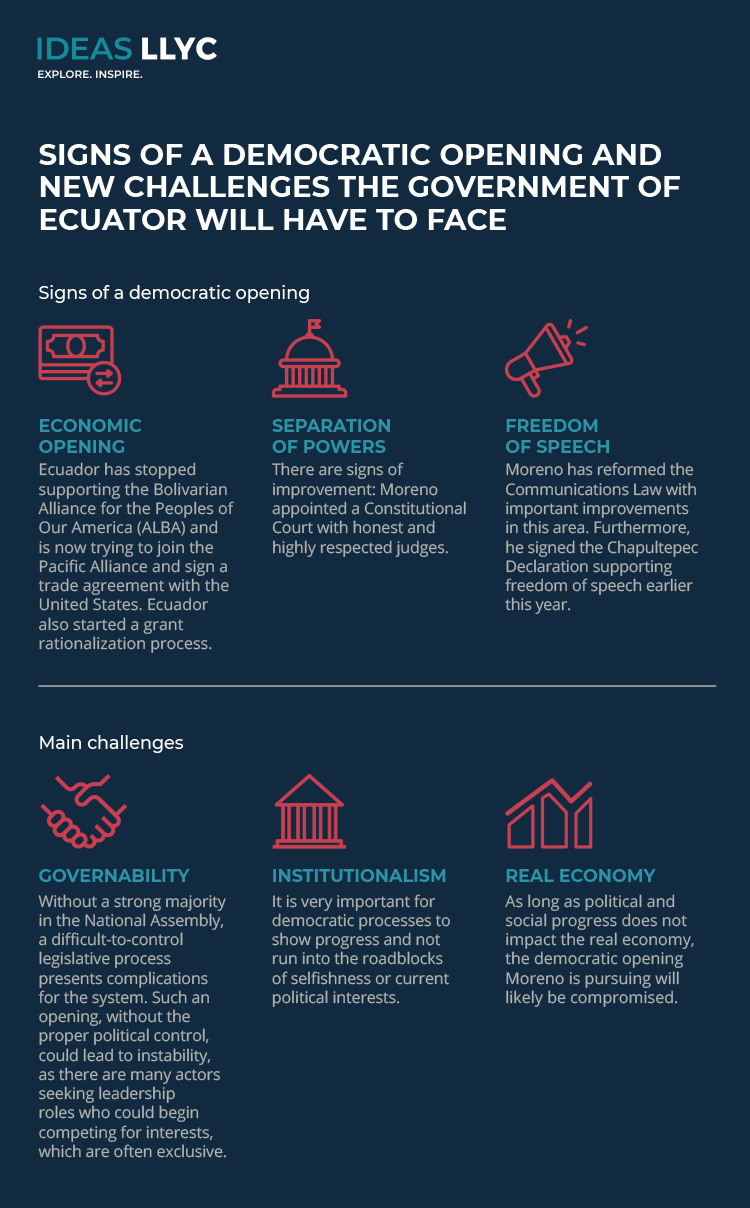 Regarding the economy, the Ecuadorian government reached an agreement with multilateral banks for US$10.279 billion for the next three years. This is a “breath of fresh air,” as far as resources are concerned. It is also a positive sign when considered alongside Moreno’s intended reforms, which intend to restore macroeconomic balance, among other goals.

It is highly probable that the disbursements agreed for 2019 will cover the looming financing gap. There are three key elements that will influence this year’s economic dynamics: in 2020, a US$1.5 billion bond will mature, implying either payment or renegotiation; disbursements from multilaterals will, in some cases, require austerity measures that could mean layoffs in the public sector; and the lack of a majority in the Legislative area could make it challenging to implement a plan to support these disbursements.

Ecuador is at a crossroads in its political and economic history. In fact, President Moreno calls himself a “transitional” leader. There’s a lot at stake. If the economic reforms prevail and successfully bring about the fiscal responsibility, caution and a return to macroeconomic balance they imply, we could see real improvements in Ecuador’s quality of life.

Furthermore, as long as the country’s political conditions, institutions and governments view the components of liberal democracy as a guiding light, we can expect better days for Ecuador’s political system. Otherwise, in a time of economic crisis, it would not be surprising if radicalism and populism were to find a new window to barge through. 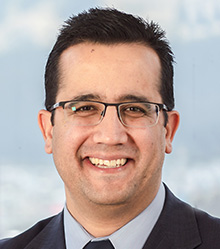 Juan Rivadeneira
Senior Director of Public Affairs
Juan Rivadeneira is the Senior Director of Public Affairs for LLYC Ecuador, with over 10 years of experience as a political consultant and researcher for companies across various sectors, as well as for local and presidential campaigns in Ecuador. He worked as a consultant, and later general manager, for a local political risk management and analysis firm, where he provided strategic and corporate political advisory. He was also a National Constituent Assembly observer and a researcher at the Observatory of Civil-Military Relations/Democracy, Security and Defense. He holds a master’s degree in Political Management from George Washington University in Washington, D.C., and a degree in Economics from Universidad Católica del Ecuador.
[email protected]
Download here
Article
Do you want to know more about it?
Articles
Areas
Professionals