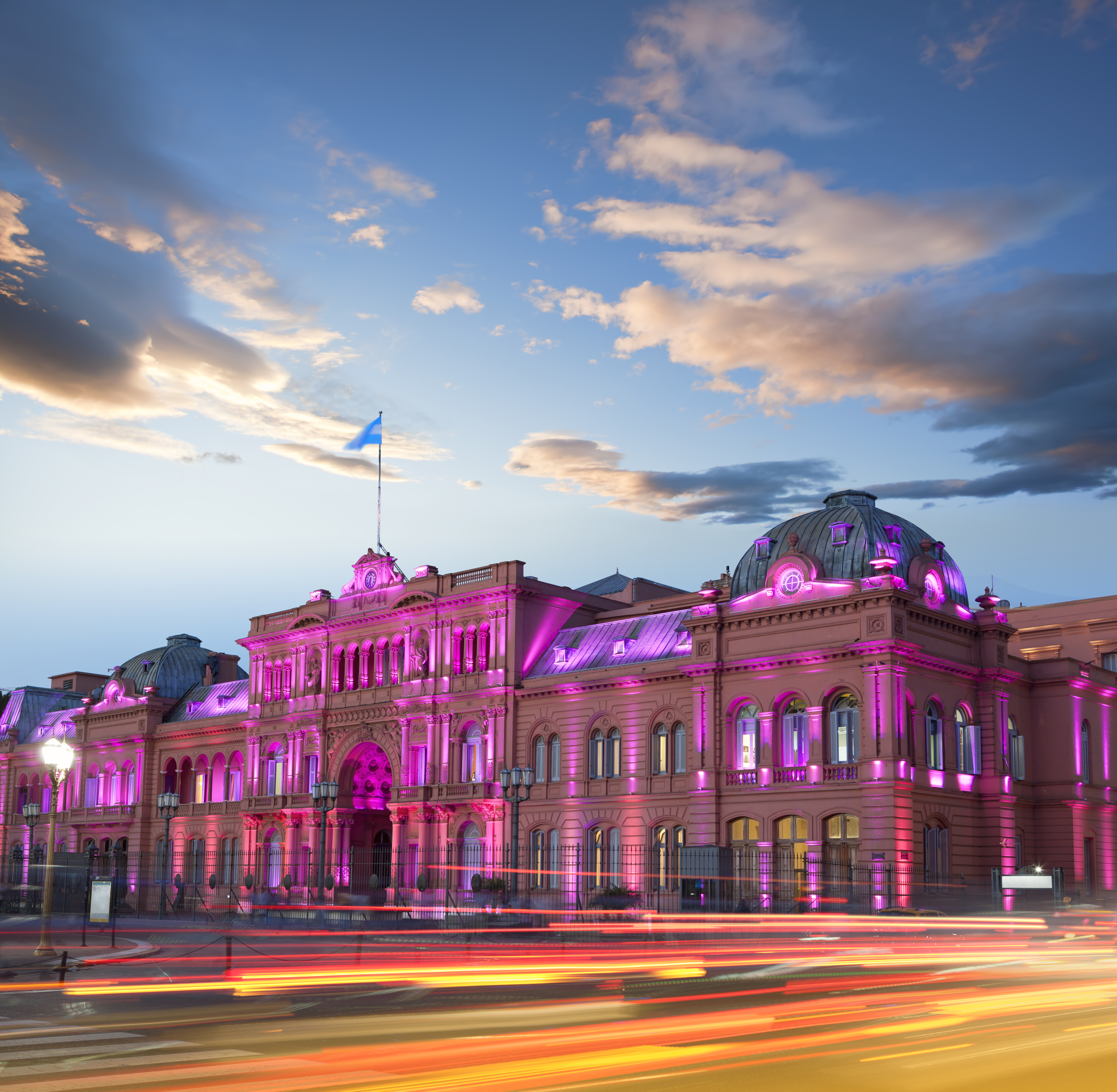 Argentina17: The future starts with an M of Macri

The ruling party (“Cambiemos”) clinched a win in Argentina’s five main electoral districts, the first time this has happened since before the country returned to democracy in 1983. It strengthened its position in August’s elections and gained more seats in both houses of Congress, although it will still have to negotiate with other parties to reach quorum. The flip side was Peronism, which lost its grip on Argentine politics: its main candidates lost. 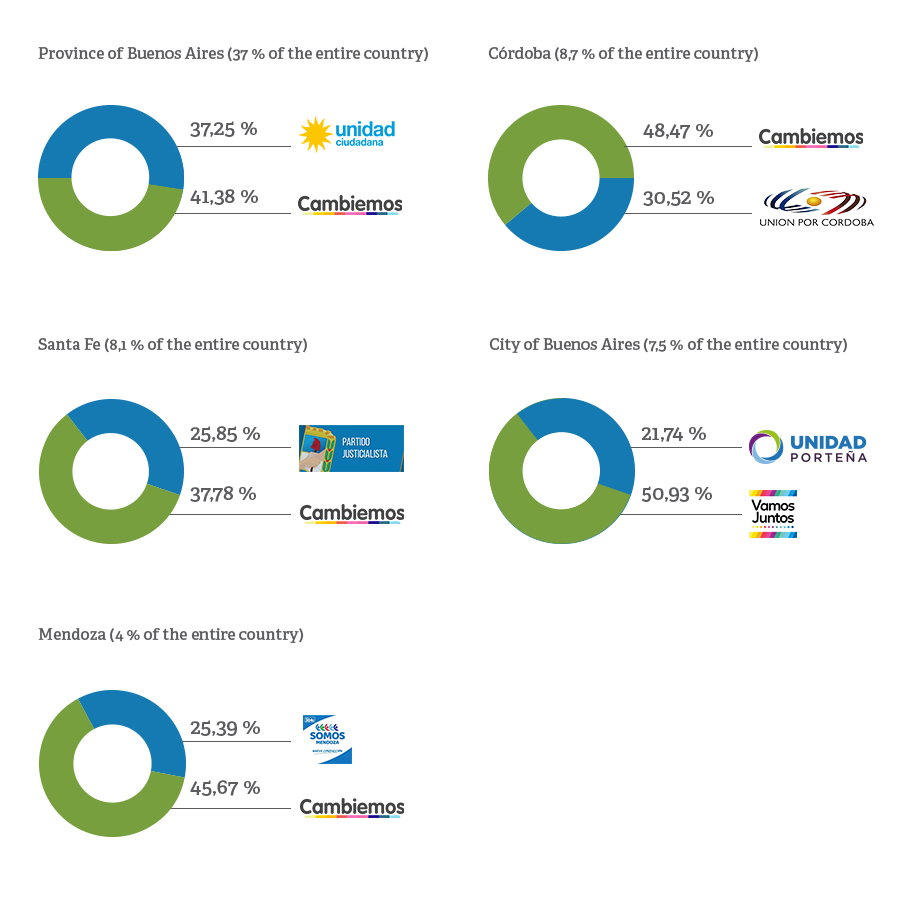 Overwhelming national victory. The government coalition was the most voted across the country: it won over 10 million votes (out of 24 million). It won in 13 of the 24 provinces, with resounding victories in the country’s five main districts (province of Buenos Aires, city of Buenos Aires, Córdoba, Santa Fe and Mendoza). It also won in historically Peronist districts like Chaco, Entre Ríos, La Rioja, Neuquén and Salta.

Gaining ground in the Conurbano bonaerense (metropolitan area of Buenos Aires). In the region where Cristina Kirchner’s influence is strongest, the ruling party improved the results of the PASO (Open, Simultaneous and Compulsory Primaries): it grew the advantage it had gained in the first voting district (from 0.4 % to 5.3 %) and closed the gap in the third (from losing by 13 to 8 points). Leveraged by these results, Bullrich managed to beat Cristina Kirchner by four points, after having fallen by 0.21 % in the PASO.

Bad election for Peronism. It was a bad day for the movement’s main leaders: Cristina Kirchner, Massa, Randazzo (province of Buenos Aires) and candidates from Schiaretti (Córdoba) and Urtubey (Salta) lost, and no clear leader needed to rebuild the party ahead of 2019 emerged. However, gubernatorial candidates Rodríguez Saá (San Luis) and Verna (La Pampa) reversed the result of the PASO and managed a win.

Still no implications in the Maldonado case. In the weeks leading up to the election, the body of Santiago Maldonado, a young activist who had participated in a protest in the south and had been missing for 70 days, was found. The opposition used the case as a key issue in the campaign and the discovery of the body days before the election raised concerns about how it would influence the outcome. However, with no significant differences between pre-election polls and the results, it is unlikely that the case had an impact.

WHAT IS NEXT FOR THE CONGRESS? 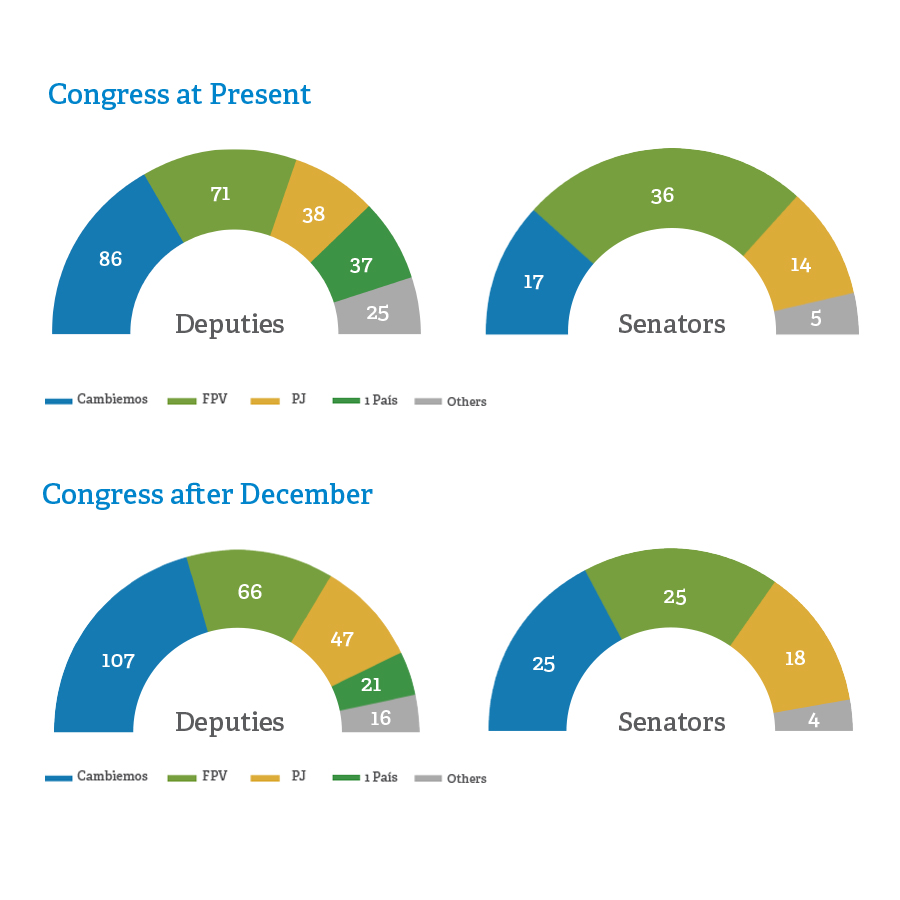 Deputies. The Chamber had been divided into thirds during the 2015-17 biennium: the ruling party (about 86 seats), Kirchner’s PJ party (around 80 seats) and other parties (about 90). After this election, Cambiemos will have between 107 and 109 seats and would be one step away from quorum (129 seats) if it manages to secure backing by allies. Of the 127 seats at stake, the government coalition was left with 59 seats.

Senate. The Peronists will lose the majority they have enjoyed for years. The block has 40 seats (37 are needed for quorum), but they only managed to secure 36 and are on the verge of a split between the senators who backed Pichetto (PJ) –just over 20– and Cristina Kirchner (FPV), who counted on around 10. The ruling party gains considerable ground, from 17 to 25 senators, and could sweep the Lower Chamber of the House if the PJ loses.

2017 parliamentary activity. The new legislators will be sworn in to Congress on December 10, 2017. The new government will seek to advance economic initiatives like the 2018 budget, deferring the tax on checks, fiscal reform and the Fiscal Responsibility Law before the end of the year.

THE PROJECTS THAT MACRI HOPES ARE APPROVED

The Chamber of Deputies approved the initiative that aims to penalize individuals for crimes of corruption. However, the text the Deputies drafted was approved in the Upper Chamber with modifications, putting it back in the hands of the Lower Chamber. The legislation is expected to be passed after the elections.

In June of this year, the ruling party’s project was defended in the Chamber of Deputies by officials of the Executive branch during a plenary session of the Commissions of Public Works, SMEs and Budget and Finance. Meanwhile, lawmakers meet with representatives from business and industrial chambers in early July in what was the last meeting on the issue to date.

The draft presented by the Executive branch in September would be approved by the Congress this year in extraordinary sessions. The government believes that the “Law of Laws” will easily be approved.

The unified projects of Cambiemos deputies, Mario Negri and Elisa Carrió, were addressed by committee over the year. In any case, the project has a total of four committees –Consumer Defense, Commerce, Penal Legislation and Budget– making agreement even more difficult.


The Government will seek to reduce employers’ contributions and the burden of tax on checks. The tax reform would be presented to the Legislative branch in the coming weeks to promote productive investment and formal employment.

This measure was not addressed in 2017 but is one of the initiatives that could gain momentum at the end of this year.

Mauricio Macri’s government continues to evaluate the options for the labor reform. On one hand, specific sectoral agreements like the “Vaca Muerta” model are being considered. On the other hand, legislative victories could mean that a general project could be drafted and sent to the Congress. The initiative would aim to facilitate training; labor laundering; and the modification of the system of deductions and contributions. It should be noted that an Executive Law on access to the first job has been held up in Parliament since last year, when it was tabled after the lack of a consensus.

President Mauricio Macri has said he will push pension reform –which will take the evolution of medicine and longevity into account– before 2019.

The new Media Law continues to be postponed by the ruling party. The Executive Branch has not yet submitted the measure in Congress and no deadlines for its entry have yet to be set.

He is a graduate in Politics from Universidad Católica Argentina, and is completing a Master’s Degree in Communications Management in Universidad Austral. Before joining LLORENTE & CUENCA he headed up the Public Affairs department of Edelman Argentina, where he worked with clients from a variety of sectors. He has also worked in the Ministry of Tourism, where he held a number of positions, including responsibility for institutional relations of INPROTUR and the promotion of Argentina in remote markets. In addition, he is a member of the Corporate Committee of the Public Relations Council and writes opinion columns in certain media.

He is a graduate in Communications from Universidad Católica Argentina (UCA) and is about to complete a degree in Politics, also at UCA. He is also a journalist with TEA. He was on the editorial board at the magazine Gente and the daily Clarín and worked at Boca Juniors in the area of institutional communication. He began his career in legal monitoring for the private sector at Agencia FOIA and headed up the area of regulatory issues in LatAm for Directorio Legislativo. He worked with clients in a number of industries, including food, telecommunications, construction, automotive, and finance. He joined LLORENTE & CUENCA in 2016.