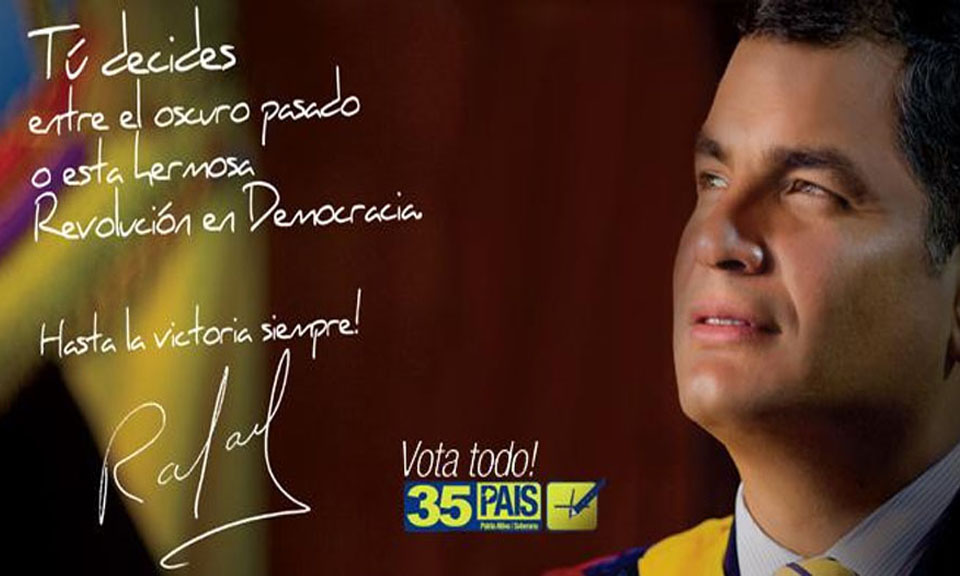 Ecuador gets into the electoral scene with a view to 2017

February 17, 2013 will be the date that will decide the political, economic and social future of Ecuador for the four next years. Ecuadorians will go to the polls to elect the President and Vice-President, 134 legislators and five representatives of the Andean Parliament. But, without a doubt, the debate will be focused on the eight candidates seeking to become President. However, according to the results of the latest polls, Rafael Correa is the favorite to keep the Presidency, with over 50% of the votes.

Nevertheless, when evaluating the six years that the Government of the “citizen revolution” –with Correa as President– several unfinished tasks can be seen that the five axis of the Government have not fully addressed: a) constitutional revolution, b) fight against corruption, c) economic revolution, d) revolution in the health and education sectors and e) restoral of the Latin American dignity and sovereignty and promotion of its integration.

Broadly speaking, it should be noted that the most severe problems are those of the agricultural sector, particularly as the land redistribution has not been carried out; those of the mining sector, still waiting for the signing of the agreements to exploit the resources and those related to the lack of tax control on the use of state funds. On the other hand, the main achievements of the “revolution” are those of social and infrastructure-related nature: in the areas of roadways, provision of infrastructure and technology to schools and hospitals, social security for domestic workers, provision of assistive devices for handicapped persons, etc.

On a different note, the electoral campaign of the opposition is focused on criticizing, for example, the mining policies of the administration and the attacks against the media and the opposition. In most cases, the diffusion of proposals is not even covered by the propaganda spaces of the media (financed by the State). That is, the path to the 2013 elections shows that Ecuador has not yet reached a political maturity beyond insults or mere superficial propaganda.

If you wish to receive more information, please download the Special Report “Ecuador gets into the electoral scene with a view to 2017”, drafted by the Ecuadorian office of LLORENTE & CUENCA.